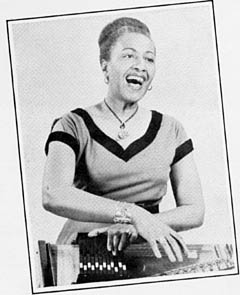 Click here for Not the New York Times, but read below for why you're here.

In memory of Charity Bailey, I have digitized my copy of the 1978 newspaper strike parody, Not the New York Times. Because of that strike, she never had a proper New York Times obituary even though she was an iconic New York resident.

To share the link, please use charitybailey.org. The address of the PDF is apt to to simply redirect to this page, because I'm trying to draw attention to Charity Bailey. (If you're looking for the young, upcoming Charity Bailey in California, that's charitybailey.com, not org.-)

For more about Not the New York Times, see the NtNYT Wikipedia article.

A single episode of Charity Bailey's show was found at the University of Georia and is now digitized. Click here to see it on the UGA site. It's an early episode from 1955 that was submitted as a candidate for the Peabody award.

This site was created in 2004 when only newspaper indexes were available on the web. The articles were on microfilm. Now, many more articles are available. Here's a remarkable article from 1928 when young Miss Bailey fought the Providence, RI school board over a teaching job.

An online search for "once upon a day" in 2018 shows that the program was shown in almost every state across America for a while in 1969.

She died 40 years ago during the New York newspaper strike and never had a newspaper obituary (although the NY Times "Overlooked" intitiative may change that). She did get a proper obituary in the October 12, 1978 Jet Magazine (a weekly sister publication to Ebony).

Charity Abigail Bailey (1904-1978) was my music teacher at Heathcote Elementary School in Scarsdale, New York 1962-68. I was also among the hundreds of children invited on her television show. Whether within the inviting multicolor windows of Heathcote or on the floor of the studio, I remember singing and moving--never one without the other. My hands were clapping or snapping or hitting some weird percussion thing. Occasionally the song had American origins, but more likely it was from South America or the Caribbean or the Middle East or Europe or Africa or Australia.

She was a pioneer in using authentic world music in elementary schools. She was born in Providence, RI, attended Rhode Island College of Education, studied at Julliard and Dalcroze, and settled in New York. She taught at the "Little Red School House" in Greenwich Village in New York City (http://www.lrei.org) 1943-1955 where she inspired Mary Travers ("beginnings" on the Peter, Paul and Mary website). She wrote songbooks, arranged for piano and guitar, sang on recordings, and hosted local television shows (Sing a Song on NBC and then the local educational station on Channel 13 before it became WNET).

Here name really was Charity Bailey with no apparent relationship to either Pearl (b. 1918 in Virginia) or Bill (vaudevillian immortalized by Hughie Cannon). She married Jack White late in life, but never used the name "White" professionally. The quiet joke among the entirely non-black families was that Mrs. White was black and Mrs. Black (a first grade teacher) was white. Before I heard that, I hadn't noticed that she was black. If asked to describe her, I would have said she was old. (Also at Heathcote, the gym teacher was Art and the art teacher was... Rosemary. Oh well.) She taught at Heathcote 1958-1970.

Go to the Smithsonian Folkways site (http://www.folkways.si.edu/index.html) and search for "Charity Bailey" to see (and hear clips from) her most notable albums: Songs to Grow on, Vol. 2 (1951), Music Time with Charity Bailey (1952), Follow the Sunset (lullabies around the world)(1953), More Music Time and Stories (1970). Note: She was not on Songs to Grow on Vol. 1 - Nursery Days which also came out in 1951 and was all Woody Guthrie whereas Vol. 2 had various artists.

She contributed to about a dozen records for Young Peoples Records from 1946 to 1952. This is according to information from David Bonner, who wrote a book on Young Peoples Records with more biographical information on Charity Bailey than anywhere else. David donated his "Charity Bailey Rhythm Kit" that he bought on eBay to the Folk Museum in Greenwich Village which doesn't exist yet.

Mary Travers refers to the Charity Bailey Children's Folk Music Project on the PP&M website. I find no other references to this charitable project "named for Travers's childhood music teacher."

A web search for "Charity Bailey" finds several other musicians who were inspired by her.

On April 9, 2005, a centennial remembrance of Charity Bailey was celebrated at the Little Red School House in New York City--inspired in a small part by this web page. LREI's old web page for the event is available on archive.org: The Family Sing - Celebrating Charity Bailey. I was delighted to get an invitation and attend.

My original college plans included majoring in English until I struggled with the reading load. I searched for a non-technical major (to complement my engineering degree) with the least reading and found music. My unlikely confidence that I would succeed in the music department can be explained only by the early comfort and delight I learned on Miss Bailey's linoleum. While I never excelled at performance, my talent with music history and analysis were excellent enough.

Charity Bailey was a fan of recorders at a time when the recorder was fairly uncommon in the U.S. In the 1960s, the instrument was probably most associated with those Austrian Trapp Family Singers. She asked my music class, "Who has a recorder at home?" My family had just bought a new-fangled reel-to-reel tape recorder. My hand shot up with pride. Miss Bailey knew me well enough that she never called on me to ask if I would like to join the class--saving one small, shy boy from great embarrassment. It would have been unspeakably funny if she had called on me. My less-clueless older sister actually did take Charity's recorder class.

She should be remembered as a visionary and not as an entertainer. She wasn't successful as an entertainer, after all. The New York Times called her "a young woman with a sad, sweet and rather light voice" (2 Jan 1946 p.23). There is a tendency in the U.S. (in the 20th and 21st centuries) to correlate dark skin with entertaining performance.  Charity Bailey is easily forgettable if that sticky stereotype is foremost. She did what no one else did.

Her most popular book was: Sing A Song with Charity Bailey-20 easy piano arrangements; chords for guitar and autoharp copyright 1955 Plymouth Music Co., NY cowritten with Eunice Holsaert. The photo at top is from the inside front cover. The first song is "Hello, Ev'rybody, Yes Indeed," which I remember singing often. It includes the Brazilian song, Sambalele, which the singer, Raffi, included (with credit) in his More Singable Songs. I think I speak for all her students when I ask, How did that Venezuelan boy in With One Peseta still have his one peseta at the end of every verse? 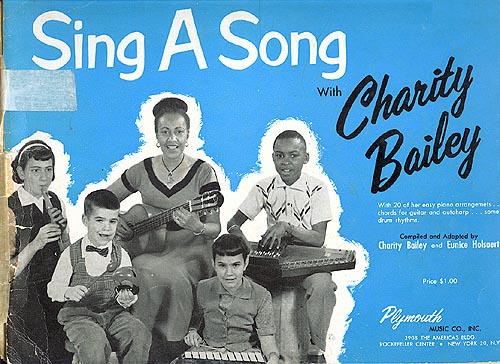 At left is the worn, taped cover of my family's copy.

The children are identified in a 1954 captioned photo in the New York Times. See Charity Bailey coverage in the New York Times. The first song is "Hello, Ev'rybody," the song that invites improvisation such as "We're Going to Miss You, Yes, Indeed," the title of her retirement article listed above. The last song is, of course, "Good-bye Ev'rybody." The inside cover says:

CHARITY BAILEY, star of NBC-TV "SING A SONG" has many years of distinguished teaching to her credit. as director of Music at the Little Red School House in New York City she has demonstrated that her methods have been an inspiration to visiting teachers from all over the country, and parts of the world as distant as Israel.

Miss Bailey is a graduate of the Rhode Island College of Education, and holds a Certificate from the Dalcroze School of Music. she and Eunice Holsaert, writer-producer of "SING A SONG", are a parent-teacher team, who pick and adapt their songs with an eye to their being musically sound as well as fun to do. On their first local show they drew 1,200 unsolicited letters from enthusiastic parents, children, and teachers, which will give you an idea why we believe so fervently in this folio.

A NOTE TO PARENTS AND TEACHERS

If this folio has the kind of song that makes you and your family sing, dance and beat out rhythms, I shall be very glad.

I hope that many of you will feel able to carry Mrs. Holsaert's and my simple notes a few steps further and think up more and more things to do with these songs, so that they may become your very own. This folio is dedicated to Faith, Shie, and all the other children who have sung, danced and made up verses with me, and whose favorite songs these are.

Additional information (which I haven't seen):

Music Time with Charity Bailey (1952) is also available on CD through worldmusicstore.com.

Web page researched and designed by Dan Axtell. Please send me any additions or corrections. I hope someone out there will write a proper biography some day.
danaxtell@
danaxtell.com