No Child You Can't Get to Sing
By William Wolf 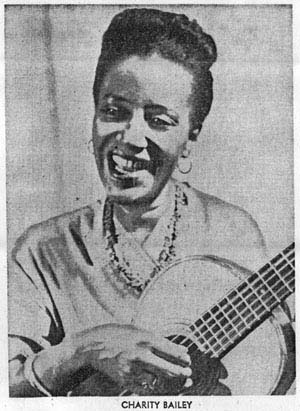 NEW YORK - Providence-born Charity Bailey says there is no child she can't get to sing. The teacher and performer, who will return to her home city to participate In the Christmas Festival, doesn't make that boast lightly.

If she meets a youngster, in no time flat she can get the child to sing a few bars in response to her irresistable prodding. Audiences will have the opportunity to test for themselves when she entertains Providence youngsters in the "Songs that Dance" program she'll be doing with dancer Judith Janus and singer-guitarist Ted Dennis, Tuesday, Dec. 27, at 10:30 a.m. at the Albee Theater.

Miss Bailey gives more credit to children than to herself for the magic that always takes place: "The thing that impresses me most and gives me impetus to work is that children have so much interest in everything. They are so very open to learning. Children in Providence don't know me. When they know me, they come up and say 'Hi, Charity,' and tell me all sorts of things just as if we had known each other for a long time."

This rapport stems from the television show she has done for Channel 13 In New York. Prior to that she was on NBC. Although she isn't doing the program now, there are regular re-broadcasts and she keeps reaching a new crop of youngsters. Her format consists of getting children to participate, and that is how it will be in Providence.

"Judy will dance," she said, "and I'll get the children to sing, and clap and listen."

The image of Charity Bailey as a performer grew on the heels of her having built a firm reputation as a teacher at the noted Little Red Schoolhouse in New York. A parent whose youngster was at school called upon her with an idea for a show. Since then, she has written books growing out of the experience.

"I was very fortunate that when I went to what was then called Rhode Island College, it was small enough so that you had the attention of your professors," Miss Bailey said in tracing her steps toward her present life. "There were so many fine professors to help me."

But when she left school, she found herself in the midst of depression days. She taught at Atlanta University after a brief period in New York, then returned to New York, and as she put it:

"I went on relief so I could join the WPA program for the arts. So many fine things were done by the WPA In those days, and there were many people who started that way."

Now she is teaching in the public school system of Scarsdale. She commutes from her apartment In Manhattan, where she lives with her husband, Jack White, formerly with the World Health Organization, and their 10-year-old adopted son, John. On special occasions she performs for various groups.
"I'm just about to plan a record with Steven Sahlein, who was a pupil of mine at Little Red when he was six," she reports. "Now he's 30."

The program she will be doing in Providence has been produced by Miss Janus and her partner, Mr. Dennis. Miss Janus, formerly with the Martha Graham dance troupe, teaches creative dancing and does special programs geared to children as a result of her interest in appearing before young people.

"Charity was the first person to whom we showed our program," Miss Dennis says, "and she encouraged us greatly. We called her the godmother of the show. Last year at Christmas time our agent asked us to do a program with Charity, and that is how our working together began.

"Our songs that Ted and I do are traveling-round-the-world songs, especially work songs. We get the whole audience to stand up and do work movements with us."

Asked if there are any strange experiences traveling with a children's program, Miss Dennis observes that it is usually strange:

"We went to a wonderful high school, very modern, only to find that they had taken down all but the last bank of lights, and we had to perform in half-darkness."

The dancer lives In Manhattan and is married to Bill Macy, an actor in the hit off-Broadway play, "America Hurrah."

Asked if there Is any way of making big money in children's theater, Miss Janus shrugs: "There might be, but I don't know about it."